Thank you to all who attended. Video archive coming soon.

FORESTRY AND WILDLIFE MANAGEMENT FOR THE BENEFIT OF BIODIVERSITY

Wildlife biologists and foresters with local, state, and federal agencies and non-government organizations are increasingly tasked with managing more than just game species and wood products but a more wholistic range of habitat and species outcomes. At the same time, ecologists realize that the restoration of some natural communities can concurrently benefit non-focal game and nongame species resulting in healthy forests, some of which produce woods products. This State Natural Area Program Roundtable will include case studies where wildlife biologists and or foresters have joined forces with ecologists in restoration projects with multiple positive outcomes across many taxa groups.

Description: The open fire-maintained pine woodland and savannas that only two centuries ago dominated much of the southeastern United States landscape have been significantly reduced. Dramatic declines in many plant and animal species dependent on this habitat type have followed, resulting in an emphasis across the region in restoration of the variety of open pine ecosystems. This presentation explores the distribution of open pine flatwoods habitat in southern Arkansas and methods used to restore habitat structure and composition towards desired conditions within that ecosystem. We will also cover some of the species that benefit from these efforts as well as the heightened need to monitor for invasive plants species during such restoration projects. 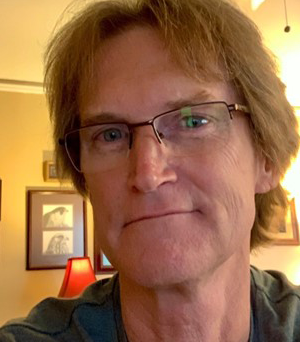 Bill Holimon
Director
Arkansas Natural Heritage Commission
Bill Holimon has worked for the Arkansas Natural Heritage Commission since 2000, first as grants coordinator/zoologist, then chief of research, and now as director. Bill is an avian ecologist with 25 years of experience in science and conservation. He has a B.S. in biology and a B.S. in accounting, both from the University of Arkansas at Little Rock, as well as a M.S. in biology from New Mexico State University. 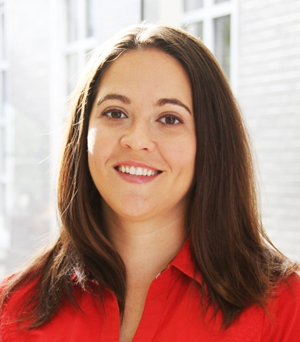 Ryan Spotts
Chief of Acquisition and Stewardship
Arkansas Natural Heritage Commission
Ryan Spotts has worked for the Arkansas Natural Heritage Commission since 2018, first as a Land Management Specialist and now as Chief of Acquisition and Stewardship.  Ryan has a B.S. in Natural Resource Ecology and Management from Louisiana State University and a M.S. in Forestry from Southern Illinois University – Carbondale.  She is a wildlife biologist at heart and is passionate about the science-based conservation that ANHC brings to all regions of Arkansas.

A Case Study in Collaboration Across Disciplines and

Description: At the boundary between the glaciated plains and the Ozarks is a rugged topography known as the Missouri River hills. Located in-between Columbia and St Louis Missouri this landscape is still primarily wooded. It hosts a diversity of different natural communities and native species ranging from xeric rock outcrop communities known as glades to rich forested ravines. The Missouri Department of Conservation has focused public and private land management in this geography that is straddled on the east and west sides by two designated Missouri state natural areas. This presentation will highlight resource management efforts and monitoring utilizing a variety of practices. 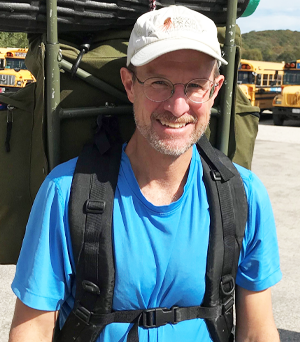 Mike Leahy
Natural Community Ecologist
Missouri Department of Conservation
Mike has worked for over 25 years for state natural resource agencies in Indiana, Virginia and Missouri. For the past thirteen years he has been the natural areas coordinator for the Missouri Department of Conservation as well as their acting Natural Heritage Program ecologist. Mike has written many technical and popular articles on aspects of natural history in the states he has worked in. Mike has a Bachelor of Science degree in Forestry from the University of Wisconsin-Stevens Point and a Master of Science degree in Forest Ecology from Michigan State University. He lives in Jefferson City with his wife and son and enjoys exploring the outdoors with his family and friends.

Pioneer Forest, in the Missouri Ozarks

Description: Pioneer Forest is a 146,000-acre forest located in the southeastern Missouri Ozarks. The property is owned by and managed under the direction of the L-A-D Foundation (www.ladfoundation.org), which is named in honor of Leo A. Drey, the founder of Pioneer Forest. Drey began acquiring forest land in the Missouri Ozarks in 1951, and had built much of the current ownership by 1956. The property is nearly all timberland and is dominated by oaks, hickories, and shortleaf pine. It has been managed since 1951 using uneven-aged single tree selection harvests on roughly a 20- year cutting cycle, in a manner best described as conservation-based continuous-cover forestry generating harvests of 6-8 milllion BF annually. Drey also realized that other properties outside Pioneer Forest merited protection, and he acquired a number of natural areas under the L-A-D Foundation simply to protect significant ecological systems increasingly scarce in the Missouri Ozarks. The active forest management program on the Pioneer Forest has built the volume and value of oak, oak-pine, and shortleaf pine-dominated forests on the landscape. That management has also created thousands of acres of unique ecological conditions that support biodiverse plant and animal communities that are underrepresented in Missouri, such as habitat for the eastern whip-poor-will and the brown-headed nuthatch. Tour hosts will review the silvicultural tactics used to maintain the uneven-aged condition that Drey valued so highly, and will highlight the program of work supporting eastern whip-poor-will conservation. The sale of forest products is a key element of the success of Pioneer Forest and the L-A-D Foundation, because the volume and value of timber sales conducted in a sustainable way provide the funds needed to operate the Forest and also supports the conservation mission on the Forest and the L-A-D natural areas. Drey’s approach to sustainable active forest management is a a practical alternative for conservation-based forestry for public and private landowners in Missouri; these methods maintain continuous forest cover, and provide valuable habitat for dozens of species of flora and fauna on public and private lands in the Missouri Ozarks. 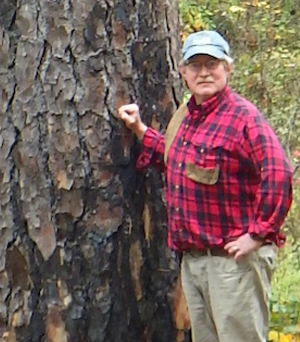 Jim Guldin is a retired research forest ecologist living in Springfield Missouri. He has a BS in Forest Science from Penn State in 1975, a M.F.S. in Forest Science from Yale 1n 1977, and a Ph.D. in silviculture and quantitative ecology from the University of Wisconsin-Madison in 1982. Guldin served on the faculty of the School of Forest Resources at the University of Arkansas at Monticello from 1982-1992, and then spent 28 years as a research scientist, Project Leader, and Center Director with the Southern Research Station of the USDA Forest Service, working from a duty station in Hot Springs, Arkansas.

During his career, Guldin developed a reputation as the Forest Service R&D expert on the silviculture of southern pines, especially naturally-regenerated southern pine stands managed using even-aged and uneven-aged methods. His career coincided with dramatic changes in management of National Forest lands

under ecosystem management through the 1990s, and more recently in the interest in ‘ecosystem restoration’ in the 21st century, especially in fire-adapted southern pine ecosystems dominated by longleaf pine or shortleaf pine. He’s published more than 170 research papers, and has given more than 200 presentations including 20 invited keynote presentations for regional, national, and international conferences. He’s also led more than 250 boots on the ground field tours in the woods for student groups, landowners, land managers, private companies, conservation groups, resource managers, and policy makers with the USDA Forest Service.

Since his retirement from Federal service at the end of 2020, Guldin volunteers as a member of the Board of Directors of the L-A-D Foundation, which operates the 146,000-ac Pioneer Forest as a conservation-based working forest. He’s also been brought back to the Forest Service under the USDA National Experienced Worker (NEW) Solutions program as a part-time silviculture expert in continuing education for agency personnel. Guldin was elected as a Fellow of the Society of American Foresters in 2020, was inducted into the Arkansas Foresters’ Hall of Fame in 2021, and is the recipient of the 2022 Lifetime Achievement Award for Silvicultural Excellence from the Washington Office of the USDA Forest Service. 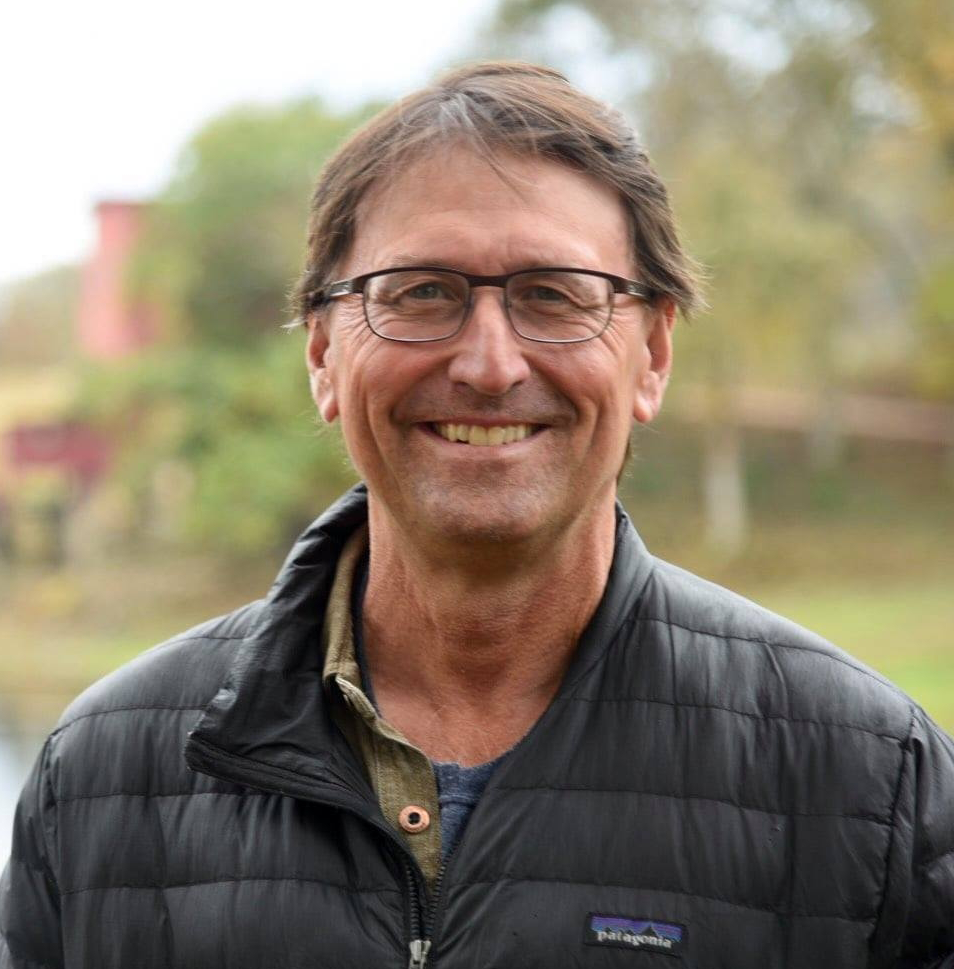 Roger Still
Foundation Manager, LAD Foundation
Roger is the Foundation Manager for the L-A-D Foundation, the largest private landholder in Missouri, whose organizational mission focuses on sustainable forestry and ecological stewardship in the Ozarks.
Roger has twenty-five years experience in conservation including State Director of The Nature Conservancy of Missouri, Vice President of the Mississippi River Region at the National Audubon Society, and as a consultant on food and nature related projects.
In Missouri he led efforts while at The Nature Conservancy that resulted in the Dunn Ranch acquisition/Grand River Grasslands project, substantial acreage expansion of Wah Kon-Tah Prairie, acquisition of a 10,000 acres in the grasslands of Brazil, and landscape scale short-leaf pine restoration in the Ozarks; at Audubon he initiated the Wildcat Glades Audubon and Conservation Center, the Audubon Center at Riverlands, and in Louisiana forged a partnership with Environmental Defense Fund and National Wildlife Federation to focus on restoration of the Gulf Coast with funding from the Walton Family Foundation.

Prior to assuming his current position in 2021, in his decade as a consultant his clients included Audubon, where he founded the Audubon Conservation Ranching certification, Nature Conservancy, Missouri Department of Conservation, Greenbelt Land Trust of Mid-Missouri, the Roy and Patricia Disney Family Foundation, Bobolink Foundation, National Tropical Botanical Garden, Patagonia, and the Boone County Nature School among many others. He currently serves on the Board of Directors for Bat Conservation International.

An Introduction to Rapid Condition Assessments of

Description: Open Shortleaf Pine and Oak Woodlands are important components of the landscape across the central and southeastern United States. These ecosystems support a variety of wildlife, including species which have declined in recent years as the amount and condition of their habitat have declined. Land managers and private landowners need guidance on how to efficiently and accurately quantify the condition and wildlife habitat value of the pine and oak woodland stands that they manage. NatureServe with the US Forest Service have provided a set of rapid assessment metrics for Shortleaf Pine – Oak and Appalachian Pine – Oak Woodlands, based on NatureServe’s ecological integrity assessment (EIA) method. These metrics can be used to (a) identify exemplary tracts that provide the best habitat for key wildlife species, and (b) monitor restoration efforts to assess progress toward the improved quality of existing tracts. NatureServe is now working with the US Forest Service, and the Missouri Department of Conservation, to integrate the Community Health Index with NatureServe’s EIA for rapid assessments of Oak Woodlands in several National Forests. 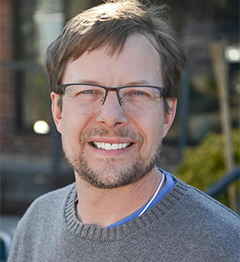 Carl has been a Regional Vegetation Ecologist at NatureServe's Durham, North Carolina office since June 2001. His work for NatureServe has included vegetation ecology fieldwork throughout the Southeast (east of the Mississippi River). He has been involved in a number of projects which use information to create conservation tools and ecosystem management products for land managing agencies, such as the USDA Forest Service, National Park Service, and The Nature Conservancy. Prior to joining NatureServe, Carl worked for 5 years as Botanist for the Tennessee Natural Heritage Program, and as a Field Ecologist for 2 years for The Nature Conservancy of Georgia (Altamaha River), and over 2 years for Florida Natural Area Inventory (at Eglin Air Force Base). He has also been involved in prescribed fire activities and has been on over 50 prescribed burns. He is a graduate of the University of Michigan, Ann Arbor (B.S. Botany).