Special thanks to the U.S. Forest Service for providing the necessary funding for this project, and to Dr. Reed Noss for writing the Foreword.

Fire has been a prominent component of Earths ecosystems ever since land plants evolved more than 420 million years ago. About half of the terrestrial biosphere burns on a regular basis (Willig and Walker 1999), providing a powerful force of selection on plant and animal traits. Fire is virtually inevitable when an environment has flammable plants, atmospheric oxygen concentrations of around 15 percent or higher, at least occasional drying of fuels, and an ignition source such as lightning, volcanic activity, or humans. Fire has affected the evolution of countless species, the assembly of biological communities, and the operation of biogeochemical processes from local to global extents (Bowman et al. 2009, Pausas and Keeley 2009, He and Lamont 2017).

Many ecosystems have become dependent on fire, in the literal sense that they would disappear in its absence (Bond et al. 2005). In North America, a large fraction of the most species-rich and endemic-rich natural communities, such as savannas, prairies, barrens, and other grasslands, are characterized by frequent fire. Fire shapes entire landscapes, opening them up to views that may subconsciously remind us of the African savannas inhabited by our earliest bipedal ancestors (Cerling et al. 2011). Coming over the crest of a wooded hill and seeing a vast savanna or prairie stretching into the distance never fails to elicit sighs of relief.

Despite the many positive contributions of fire to biodiversity and esthetics, humans have a conflicted relationship with fire. We find fire warming, exciting, and often beautiful, but we are also frightened by fire (often justifiably) and complain about the smoke and the appearance of the burned vegetation. From a conservation perspective, not just any fire is a good fire. Species and ecosystems do not prosper or depend on fire per se, but rather on a fire regime resembling that with which they evolved. When fire regimes are altered, for example when fires burn more or less frequently or intensely than what species experienced during their evolutionary histories, or in an unfamiliar season, many species and even entire communities can be at risk of extinction. Exotic species such as cheatgrass (Bromus tectorum), which enhances fire frequency and spread, and tall fescue (Festuca arundinacea), which inhibits fire spread, alter natural fire regimes and contribute to declines of native species. Hence, it is only natural that natural areas professionals and the Natural Areas Journal have long had a keen interest in fire ecology and management. Studying or managing fire is often a big part of our jobs, and it must be done on the basis of the best available scientific evidence.

This compendium of articles from the Natural Areas Journal celebrates the history of publication on topics in fire ecology and management in this journal. We have sought to include all articles in which fire is an important topic. Our hope is that this collection of articles will be of use to scientists and managers who regularly address fire ecology in their professional work, as well as to others who find fire interesting. May the numbers of such people grow.

As with virtually all papers ever published in the Natural Areas Journal, the articles in this fire compendium all have direct or strong indirect relevance to conservation practice, including restoration and management of natural communities and species of conservation concern. Study areas are largely from the southeastern United States (45% of papers), which perhaps reflects the origin of the science of fire ecology in this region and the continued strong tradition of prescribed burning here. Many papers (33%) are from the Midwest/Great Lakes/Great Plains regions, a major stronghold of the Natural Areas Association since its origin and another region where prescribed burning has a long history.  A few papers are from the northeast, the Rocky Mountains, California, and Oregon.

The articles in this fire compendium address a wide variety of specific topics related to fire management, too many to summarize in detail here. However, I find it noteworthy that 31% of papers address the problem of regeneration failures or restoration needs of pines and/or oaks, the two major tree genera in North America that have many species adapted to fire. Not surprisingly, the next largest category of papers (19%) addresses the relationships of particular imperiled species or natural communities to fire regimes. Several papers report research or management issues related to large ungulate browsing and grazing in relation to fire (17%), fire history as determined through tree rings and fire scars (12%), and issues related to burn season, nonnative species, invertebrate conservation, and climate change (7-10% for each of these topics). A couple papers discuss the challenges of designing and implementing fire management plans. Many articles at least mention the importance of heterogeneity in fire regimes and patchiness (including fine-grain) in fuel loads and resulting fire behavior. This is a relatively new concern in fire management and deserves increased attention.

I believe this collection of articles on fire ecology and management will be a tremendous resource for natural areas professionals, as well as for students, researchers, and others with an interest in fire. It provides a gateway to the scientific literature on fire ecology and summarizes many current topics in this field. Fire ecology is a growing and urgently needed discipline, one that cannot be ignored by anyone interested in maintaining the diversity of life on Earth. 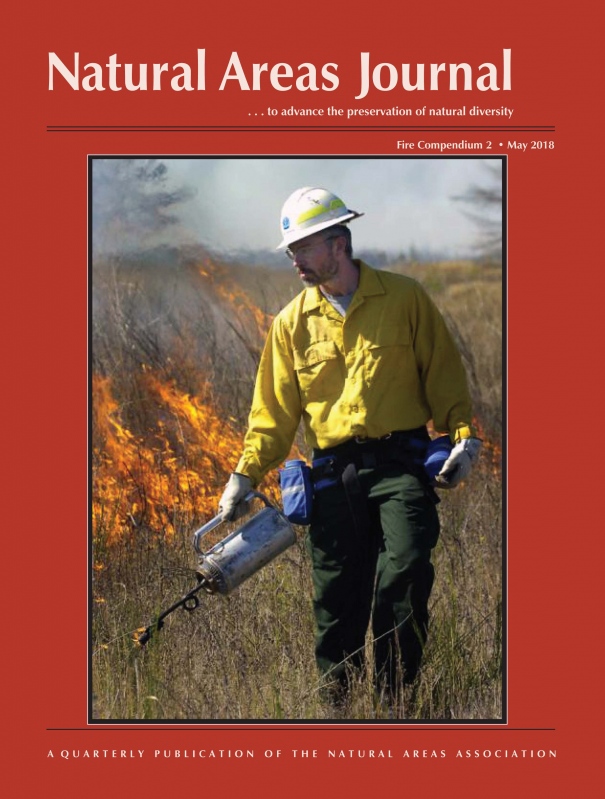